Start a Wiki
watch 01:35
Who is Peppermint?
Do you like this video?

Peppermint is the stage name of Agnes Moore, a drag performer from New York City, New York. She was one of the 14 queens who competed on the ninth season of RuPaul's Drag Race. Peppermint was runner-up to winner Sasha Velour, placing 2nd overall.

Back in her college years, her crush's favourite candy was peppermint. To get his attention, she named herself after the sweet. It has remained the same ever since.

Episode One: "Oh. My. Gaga!"- For the main challenge, the girls had to compete in a charisma, uniqueness, nerve, and talent pageant, serving up a hometown look and a Lady Gaga look. For the hometown look, she did a Statue Of Liberty outfit, which represented New York City. For the Gaga look, she chose Gaga's David Bowie outfit. She was critiqued for not having very much detail.

Episode Four: "Good Morning Bitches!" - The girls were split into teams and had to do a morning show with Naya Riveria. Peppermint was chosen by Trinity Taylor to be on her team. Trinity and Peppermint were doing a segment together, opening the show. Peppermint stumbled on her words a lot whilst they were both playing on an idea that Peppermint had slept with Trinity's husband, which was called dark from the judges' panel and needed to be more "light-hearted". She was read on the runway for a bad outfit, and placed in the bottom three but did not have to lipsync. In her episode recap on her YouTube channel, she admitted throwing away the outfit she wore for the runway as soon as she got home.

Episode Five: "Reality Stars: The Musical" - Peppermint was cast as Britney Spears in "Kardashian: The Musical", and was initially worried about how she'd pull a Britney impersonation off. Peppermint was praised for her humorous performance and placed high in the challenge, but did not win.

Episode Six: "Snatch Game" - Peppermint chose to do Real Housewives of Atlanta star Nene Leakes for Snatch Game, and was confident about her impersonation due to her successful Britney Spears the week before. Peppermint became nervous and froze during Snatch Game, and did not deliver the impersonation she thought she could. In the workroom, Peppermint came out to the rest of the contestants as transgender, with them all supporting her and having her back. On the runway, Peppermint chose to do the look from Madonna's "Material Girl" video, which was repeated by Shea Coulee, and was criticized for wearing pink 3 weeks in a row. Her runway and performance landed her in the bottom two against Cynthia Lee Fontaine, but her lip-sync skills and 90's inspired dance moves managed to keep her in the competition.Episode Eight: "RuPaul Roast" - Peppermint started off talking about how her and Farrah Moan had not won a challenge yet, and that she needed to win one. The challenge was to roast Michelle Visage. In the roast, Peppermint did very well, making the audience and the entire panel of judges laugh. She was praised for being the funniest despite a roast being out of her comfort zone and won her first and only challenge.

Finale: In the interview section, Peppermint talked about being the "lip-sync assassin" of the season and balancing being a drag queen and a trans woman. She received a message from actress and trans activist Laverne Cox. In the lip-sync tournament, Trinity Taylor chose to compete against Peppermint, and Peppermint selected the lip-sync song, which turned out to be "Stronger" by Britney Spears. With a costume and wig change towards the end of the song, Peppermint won the lip-sync, advancing her to the Top 2. She then competed against Sasha Velour for the crown to "It's Not Right But It's OK" by Whitney Houston. Despite an intense and energetic performance, Sasha Velour eventually won the lip-sync and the crown, leaving Peppermint as runner-up. 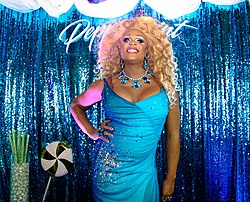 Retrieved from "https://rupaulsdragrace.fandom.com/wiki/Peppermint?oldid=115675"
Community content is available under CC-BY-SA unless otherwise noted.